On this page you can find out more about New Zealand, also known by its Maori name, Aotearoa. (To pronounce this, say "Ah-oh-teh-ah-roh-ah".)

New Zealand is such a beautiful country, from the breath-taking mountains of the south island to the sub-tropical forests and palms of the Far North.

Looking to visit the country for a special occasion like an anniversary or honeymoon? Romantic Gestures offers personalised romantic planning and luxurious getaways. Hermione's business in An Ocean Between Us was based on Romantic Gestures! Go here to find out more.
Once a country that—even if they’d heard of it (which was rare)—most people couldn’t point to on the map, now we are enjoying relative fame as the place where Peter Jackson filmed the movie adaptations of The Lord of the Rings and The Hobbit. New Zealand’s mountain ranges and green pastures have become synonymous with Middle Earth, and even if your average reader still can’t point to it on a map, most people have at least heard of us now.

But what do you really know about New Zealand? Firstly, it’s not the same as Australia. We’re some 1400 miles east of Australia—that’s apparently around the distance from NYC to New Orleans, or London to Marrakesh in Morocco. And no, there’s no bridge between the two countries. Our capital is Wellington—not the biggest city, Auckland, as many people think. And yes, sheep do outnumber humans by a ratio of about thirteen to one.

Here it is on the map, in case you didn’t know: 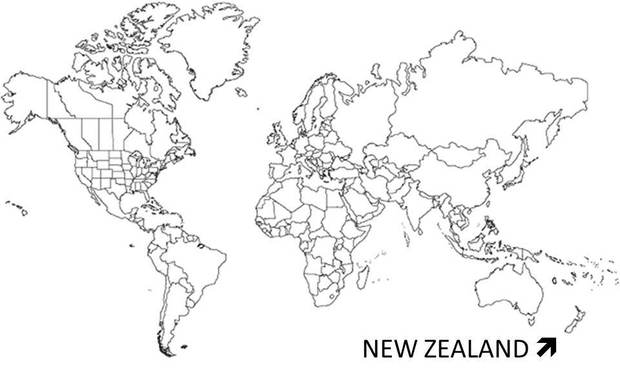 Other interesting facts about the country:
• New Zealand was the first country to give votes to women in 1893
• The country got its name from Dutch explorer Abel Tasman who named it after the Netherlands province “Zeeland”
• New Zealanders are called “kiwis”—after both the flightless kiwi bird, which is indigenous to the country, and the kiwifruit that grows here in abundance.
• Yes, I often go under the name Kiwi Bird on the internet.

The country consists of two islands (called, rather unimaginatively, North and South Island) plus a smaller island called Stewart Island at the bottom. Interestingly, Stewart Island used to be called South Island and the South Island was referred to as Middle Island! Oh, and Kiwis still jokingly refer to Australia as West Island

The whole country is about 1000 miles long – roughly the same size as Japan or Great Britain (but there’s only 4 million people here compared to Japan’s 127 million or the UK’s 63 million!) This means that the South Island is relatively cool with a similar climate to much of North America and the UK, with distinct seasons, warm, dryish summers and cool, wet winters. But the Northland where I live is sub-tropical, hot, sultry and humid.

However, let's get on to the important stuff. The country's national games are rugby for the men and netball for the women. Before every national rugby match, our team - the All Blacks - perform the haka, a Maori war song. If you've not been treated to a display of this before, have a peek now.
And finally, to those of you who have read/are reading my Doubtless Bay series, here are a few pictures taken at Mangonui, in Doubtless Bay, where the books are set. It was a bit of a gloomy day, but hopefully it gives you an idea of where the shop would be located!

KEEP UP WITH SERENITY